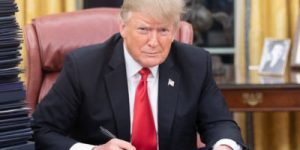 At the Republican National Convention a video showed multiple NYCHA residents who are considered community leaders appear to speak in favor of President Donald Trump and instead cast blame for NYCHA’s woes onto Mayor Bill de Blasio.

Though the video has been widely discredited, with the interviewees even speaking out, this has created a tremendous amount of confusion.

So where does Trump stand on public housing?

Consistent Attempts to Slash the Budget

There are two lines to look at:

When Trump came into office in 2017, he proposed cutting the capital fund by $1.3 billion and the operating fund by $600 million.

In 2019, he proposed merging the two funds into one and reducing overall funding.

In 2020, he proposed eliminating the capital fund and reducing the operating fund by nearly $1 billion, or 21%.

Each year it is congress that has rebuffed these severe cuts, keeping funding largely stable.

Another indicator of where Trump stands on public housing is his approach to RAD. RAD, or rental assistance demonstration, was just that when it was created by Obama in 2012 – a demonstration. It was a pilot program designed to explore the use of private funds in the management of public housing buildings, and there was a cap on the number of units that could be effected nationwide: 60,000.

Why does this matter? RAD is a program that privatizes public housing units and brings in private managers who are in the business of profiting off of property.

1 thought on “Where’s the Money?: Trump’s Stance on Public Housing”