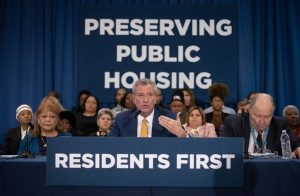 Time and again, we are told by public officials that there is no public money to fix NYCHA. That private investment is the only option. As a starting place for contesting this, the Justice For All Coalition compiled a list of pots where that money could come from – some existing, and some that could be created. This preliminary inquiry demonstrates that if officials dedicated a modicum of time and effort to this task, they could easily address all repair needs now.

Want to help? See where your elected officials stand on these topics, and pressure them as needed.