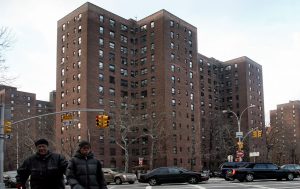 On Thursday, Representative Alexandria Ocasio-Cortez of New York and Senator Bernie Sanders of Vermont introduced the Green New Deal for Public Housing Act, taking the fight against the housing and climate crises to the halls of Congress. Through a 10-year mobilization of up to $172 billion, the bill would decarbonize and upgrade more than 1 million units of public housing. (To put that in perspective, if those homes formed a single city, it would be the country’s fourth largest—more populous than Houston, slightly smaller than Chicago.) The legislation gives a glimpse of how a Green New Deal could improve lives, attack inequality, and slash emissions. We would know because our think tank, Data for Progress, researched the damn bill.

Our analysis shows this piece of the Green New Deal would create up to 240,000 jobs per year while cutting public housing emissions from 5.6 million tons of carbon annually to zero (the equivalent of taking 1.2 million cars off the road or, for Fox & Friends viewers, having 1.8 million fewer belching cows in our pastures). A lot of this work would happen in New York City, which has the most public housing in the nation. But outside the five boroughs, federal investment would actually create more onsite construction jobs in red states than in blue ones (up to 46,000 per year in states that went for Donald Trump in 2016 and 29,000 in states that went for Hillary Clinton). Up to another 12,000 onsite jobs per year will be created in colonies without national voting rights (Puerto Rico, in particular). And in red congressional districts, Green New Deal investments would provide approximately 12,000 jobs for public housing residents.

Though we think it could be a real winner in Trump’s America, the legislation won’t pass through the Mitch McConnell–controlled Senate or even make it to the floor of the Nancy Pelosi–run House. But the bill is more than mere message. It strikes at the heart of a rotten consensus that has propelled our country into a generational housing crisis and our planet into a species-threatening climate emergency.