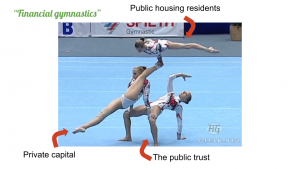 NYCHA has been moving at breakneck speed to privatize public housing. First with infill, then with RAD and PACT, and now with the Blueprint. This latest plan was announced in July, and already, hearings are planned on legislation that has been proposed by NYCHA, and NYCHA is closing its public comment period by the end of the year. Meanwhile, too many folks don’t know what the Blueprint is and what it means for them, their right to housing, and their future.

In short, these plans together will end public housing as we know it, and thus must be stopped today.

Read JFAC’s Statement of Concerns about The Blueprint, and upcoming actions you can take.