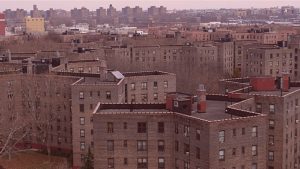 In December 2018, the second and seemingly final installment of NextGeneration NYCHA (NextGen) was announced. This version includes three mechanisms that the city claims will address the housing authority’s financial deficits, failing infrastructure, and deteriorating living conditions. These mechanisms invite private developers to build on NYCHA’s campuses, convert units to private management, and allow private developers to purchase untapped air rights hovering over some public housing buildings. The city claims this plan will generate $24 billion to fix vital repairs, and secure a future for public housing that would otherwise not be possible. In a Star Wars-esque fashion, the city says, NextGen, you’re our only hope.

I do not share the city’s assuredness. My fears stem from an understanding of how the goals of NextGen become skewed when we look at them in the broader context of how affordable housing has been managed in New York City over the last 25 years. Rather than preserving public housing, NextGen is the continuation of the opening up of investment opportunities for already-wealthy private actors and entities. History also tells us this usually comes at a high cost for residents and existing community members.