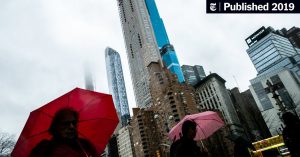 A plan to tax the rich on multimillion-dollar second homes in New York City has rapidly moved closer to reality, as legislative leaders in Albany and Gov. Andrew M. Cuomo have all signed off on the idea as a funding stream for the city’s beleaguered subway system.

Mr. Cuomo said on Monday there was a consensus among the state’s leaders, all Democrats, that a so-called pied-à-terre tax was a good idea, calling it the “only agreed-to new money” for a state facing a significant drop in tax revenue.

Mr. Hoylman said there were many pressing needs that could use an influx of recurring funds, and was agnostic about whether the money be placed in a dedicated revenue stream for something such as the Metropolitan Transportation Authority.