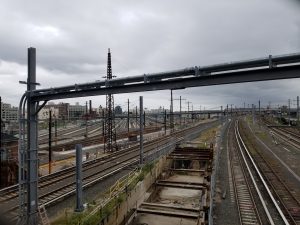 Over the last year, the quasi-private, city-affiliated NYC Economic Development Corporation (EDC) has been peddling yet another megaproject for southwestern Queens. This time the proposal focuses on decking and developing over Sunnyside Yards. Through a series of public meetings the agency asked residents to imagine and think big about how this new development could meet community members’ needs and solve the ongoing and exacerbating challenges they and their neighbors face.

But as organizers and activists have asserted from the beginning – most recently with a public statement signed by 43 grassroots groups across the city and a press conference on November 25th – development over Sunnyside Yards cannot address the challenges Queens’ communities are facing. Further still, development of Sunnyside Yards is emblematic of a broader and fraught city-building process, which is churning communities across the city and displacing working-class communities while building new neighborhoods for wealthier, whiter households. To boot, we also know that the real winners of this remaking of our city are already-wealthy real estate developers and private equity firms.CityViews are readers’ opinions, not those of City Limits. Add your voice today!

More to this point, grassroots opposition is rooted in a holistic understanding of past and present development across our neighborhoods. This broader scope renders Sunnyside Yards and the underlying development agenda as one that reifies and exacerbates existing inequalities and promises the continuation of past state-led harm. Through this expanded scope, the only responsible decision to development over Sunnyside Yards is “NO!”.

To understand this further, let’s recall the evening of April 30th, 2019 when EDC held a “public workshop” regarding development over Sunnyside Yards at the Jacob Riis Neighborhood Settlement, a community center in the heart of Queensbridge Houses. The focus of this workshop was “sustainability and green infrastructure”, and after outlining the “who”, “what” and “where” of the project’s planning process, they shifted to talking about climate change in NYC. An introductory slide highlighting Sandy’s 44-person death toll, $19 billion financial loss, and the deadly-nature of worsening extreme temperatures suggested the agency was aware of an impending crisis. And yet nothing suggested they were aware of the ongoing crisis that already existed in the place where they stood.

NYCHA tenants on the whole, including those living in the local campuses of Queensbridge, Ravenswood, Astoria and Woodside Houses, are living with $25-32 billion worth of unmet capital needs. This means buildings are deteriorating around residents as they work to make a life for themselves and their families. Most commonly we hear about the outdated boilers, unreliable heating systems, or the lead paint, but residents also have mold, rodent infestations, large appliances in disrepair, cracked and leaking pipes, broken windows and elevators and more. These issues are not new, and have been worsening exponentially with time, in tandem with state and federal funding cuts. More so than the growing price tag needed to remedy this situation, it’s tenants’ health and quality of life that are on the line.

The city’s consistent response to the declining habitability of these buildings and units has been that in our $90+ billion annual budget, there is no money. Instead, their solution is to outsource management and repairs to predatory equity firms through a program that we know—and the city knows—will displace existing residents.

And yet, for the succession of megaprojects the city has proposed for the region including Sunnyside Yards, there are always billions of dollars available.