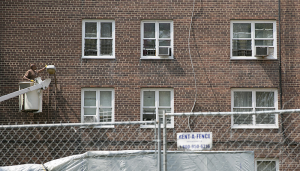 The television, the outlets, the desk are all covered in dust. The grime on the windows is so thick that there is almost no visibility. Black mold dots the walls and the ceiling.

Soon after Estrella moved into her New York City Housing Authority apartment in the Bronx, her toddler David developed asthma. Over the next nine years, emergency visits to St. Barnabas Hospital became a regular feature of David’s life.

“It’s hell for him,” said Estrella, her eyes welling up with tears, during a recent interview at her home. “He is 10, and all you see is his chest getting ready to pop out. You know, it’s sad. I don’t want my baby to go through that.”

Problems such as lead paint and broken boilers have dominated the headlines about NYCHA in recent months, as the country’s largest public housing authority has taken center stage in Gov. Andrew Cuomo’s reelection campaign, and in his feud with Mayor Bill de Blasio.

The stressors facing NYCHA residents in its worst developments, though, go well beyond broken boilers. Fetid air, vermin, poorly lit hallways and stairwells, crime, sustained poverty and its concomitant health risks have the psychological effect of the erosion caused by a steady leak on a piece of concrete. Not much is noticeable at first. Over time, wear and tear begin to show on the surface, a sign of deeper problems below. Eventually, the cement erodes.

But it is the air that’s doing the most damage.

Every breath does a little bit more damage, taking a toll that over the years leads to higher risks for all manner of chronic disease.

And for those with little or no income, the expense of trying to work around asthma triggers — the literal cost of fresh air — helps ensure people in poverty stay there.

“The prescription, honestly, has to be getting people into better units that are free of these triggers,” said Diana Hernandez, an assistant professor at Columbia University’s Mailman School of Public Health. “Their own home environment is so dilapidated that it becomes the thing they spend all their mental energy on, and it is hard to focus on other issues in life.”

Continue Reading >> The long-term health consequences of living at NYCHA