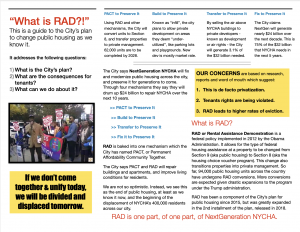 You’ve probably heard the word, and maybe you’ve heard a little about what this is, but what exactly is RAD, how does it fit into the City’s larger plan to “fix” public housing in NYC, what does it mean for tenants, and what can we do about it?

At the bottom of this post, there is a printable tri-fold pamphlet that contains the same information.

The City says NextGeneration NYCHA will fix and modernize public housing across the city, and preserve it for generations to come. Through four mechanisms they say they will drum up $24 billion to repair NYCHA over the next 10 years.

RAD is baked into one mechanism which the City has named PACT, or Permanent Affordability Community Together. The City says PACT and RAD will repair buildings and apartments, and improve living conditions for residents.

We are not so optimistic. Instead, we see this as the end of public housing, at least as we know it now, and the beginning of the displacement of NYCHA’s 400,000 residents across our city.

OUR CONCERNS are based on research, reports and word of mouth which suggest:

RAD or Rental Assistance Demonstration is a federal policy implemented in 2012 by the Obama Administration. It allows for the type of federal housing assistance at a property to be changed from Section 9 (aka public housing) to Section 8 (aka the housing choice voucher program). This change also transitions properties into private management. So far, 94,000 public housing units across the country have undergone RAD conversions. More conversions are expected given drastic expansions to the program under the Trump administration.

RAD has been a component of the City’s plan for public housing since 2015, but was greatly expanded in the 2nd installment of the plan, released in 2018.

In 2016, the City piloted RAD at Ocean Bay Houses in Far Rockaway. Between Jan 2017 to Feb 2019, Ocean Bay had the highest rate of eviction of all public housing across the city – more than 2x the next highest rate.

This is expected because displacement has accompanied RAD conversions across the country.
Research suggests tenants can also expect to be removed from their current apartment, relocated several times, experience difficulty with recertification after job changes and more.

Will my Rights Remain Intact?

The City says yes, and on paper, the answer is yes. There are no legal changes to the rights of NYCHA or public housing tenants, and protections are actually expanded.However, in reality, this is not what we, JFAC, are hearing from tenants across the city. Nor is it what researchers are finding in converted buildings across the country.

Instead, there are reports of consistent and blatant violations of tenants rights – from not holding meeting with tenants about conversions until decisions are made and moving forward, to not adjusting rent to changes in income.

This seems a lot like privatization, but the City has consistently said it is not privatization. What is going on?

We assert, this is de facto privatization. Though the city maintains partial, legal ownership, in effect, private managers will be in charge of properties and tenants’ futures.

Do you agree? We ask you:  If the city has already been struggling to care for NYCHA properties and respond to tenants’ needs, and these conversions will downsize their staff as tasks are taken over by private managers, what kind of ‘ownership’ and capacity to intervene can we expect the City to have in this arrangement?

ACTION: Our Power is in Our Numbers

If we don’t come together & unify today, we will be divided and displaced tomorrow. Here are some ways we can work together now, so we can be here together tomorrow.

Source: What is Rad?! – Justice For All Coalition