Report: Defund the NYPD & FUND NYCHA: The Contours of Hyper-Policing in the Projects 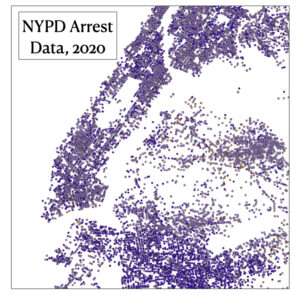 Last summer, #DefundNYPD and “defund police” more generally became a rallying cry for activists – so loud that it became a seriouspolicy question that cities across the country had to reckon with during budget negotiations. And now it is a central question during our city elections this year. Through our work as the Justice For All Coalition, we learned that some residents are weary of this movement, worried that it could put themselves, their families, and their neighbors at greater risk, so we undertook a closer examination of the relationship between policing and the experiences of residents living in public housing. This report summarizes what we learned through that inquiry and concludes that police are not the answer to the problems plaguing public housing residents, but instead are a key part of the problem.

The third part highlights the broader consequences of policing – including making it harder to access housing, jobs, and higher education, while jeopardizing one’s right to participate in our formal political system.

The fourth part examines what the research highlighted in part two looks like for residents in real time in western Queens.

The fifth part focuses on how policing overlaps with other forms of structural oppression, such as access to income, food, and well-being. It also highlights the role public housing residents play in caring for society writ large.

The sixth part brings us back to thinking about budget allocations, leading us to the seventh part where we discuss where we need to go based on this assessment and how we get there, and are already getting there.

In short, rather than continuing or expanding policing, this analysis finds that reallocating the NYPD’s budget is the only fair and just response, and suggests investing public money in alternative, community-based models of safety, security, and well-being.

Get the full report!Download
Posted on: February 27, 2021