The Nefarious Nature of the Private Partners Selected for RAD Conversions 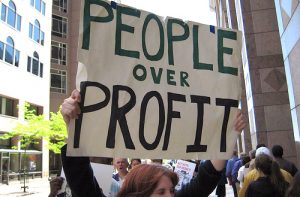 RAD is a program through which public housing buildings and units are transferred from Section 9 to Section 8, and private entities are brought in to management and repair the buildings.

We looked into these private entities to learn a bit more about who the city was transferring control over too – who’s hands were they putting NYCHA tenants in?

This preliminary analysis examined the development, management, construction and social service entities that have been assigned to NYCHA developments that are in the process of undergoing RAD conversions or have already.

In contrast to the hopeful promises expressed by the City and NYCHA, such an examination raises questions about the nefarious nature of the private actors assembled, and confirms concerns raised by tenants, advocates, and activists about persisting neglect and the potential for displacement.

This post highlights some of entities that we were able to easily find dirt on, but there is more to be found on these and the other selected private partners. To clarify this point further – this list is not about highlighting or removing these specific bad actors from an otherwise benign process. The process itself – reliant as it is on privatization and financialization – is what must be changed. The details shared below are merely evidence of the broader tension between people and profit that housing advocates, activists and residents have been highlighting longstanding.

With that in mind – below I list out some of the private actors to whom control over some NYCHA properties has been or is being transferred. At least one of these actors is involved in each of the deals that had been made by February of this year. Together these deals, as it stands now, determine the fate of households in more than 16,000 units across more than 25 NYCHA campuses.

A last thing to note is that many of the private actors are affiliates or subsidiaries or off-shoots of others, sometimes being run by the same person. For this reason, some have been grouped.

This also includes MDG Design + Construction & RDC Development because the former two make up the latter. Together this group is set to manage 4,806 units across Williamsburg, Harlem River I & II, Betances, Ocean Bay Houses. This is 30% of the total units being converted.

Wavecrest is notorious among housing activists and advocates for past abuses inflicted on tenants and negligence. Eviction is a part of their business plan. According to one inquiry, in 2019, Wavecrest had 312 evictions across more than 362 apartment buildings, with 12 in one building in the east Bronx.

These trends have continued at Ocean Bay Houses, the campus where RAD was first piloted in NYC in 2016. Between January 2017 and February 2019 Wavecrest brought more than 300 households to court for eviction, and were successful in 80 cases. This was the highest eviction rate of all NYCHA campuses during that time frame, and more than double the second highest rate. Moreover, an inquiry by the The City found that tenants weren’t necessarily happier with the service and repairs either.

This also includes their subsidiary L+M Builders and Camber Property Group which is run by former employees, including his son. Together this group is set to manage 2,866 units across Linden, Audubon Bethune Gardens Marshall Plaza, Baychester, and Murphy Houses, or 18% of the total units being converted.

Eviction is also a feature of L+M’s approach to management. In 2019, they were ranked number two on a list of NYC’s Worst Evictors, up from earning the sixth slot the year before. The list is maintained by The Right to Counsel NYC Coalition, JustFix.nyc, and Anti-Eviction Mapping Project

Omni New York LLC is third on that list, up from fourth the year before. They are set to manage 2,625 units across Armstrong I & II and Weeksville Gardens, or 17% of the total units being converted.

Acacia Network is another highly concerning private partner. They are set to manage 2,012 units across Hope Gardens, Bushwick, and Palmetto Gardens, or 18% of the total units being converted.

Their website claims they have been committed to improving the quality-of-life and well-being of underserved communities in New York City and beyond since 1969, but an inquiry by Sludge last year paints a different picture. This reporting highlights that Acacia is not only the largest provider of homeless housing in New York’s metropolitan area, today it is “a web of interconnected nonprofits and for-profits that offer shelter, affordable housing addition and medical services and security.”

Fiscally speaking, “in total, 10 Acacia entities have received roughly $1.17B in city funding since 2010.” In 2019 alone, it received $259 million in contracts from the Department of Homeless Services, or 18.5% of the department’s contracts that year.

Yet residents of their shelters report neglect and levied heavy complaints regarding maintenance, supply and safety issues. While shelter residents noted broken elevators, broken toilets and a lack of tissue paper, faulty wring, broken carbon monoxide detectors and damaged plumbing, Sludge also found that as of August 31, 2019, “Acacia buildings had hundreds of open violations,” and that a master’s thesis completed in 2018 found that building conditions under Acacia management had worsened over time.

The Kraus Organization is another private partner whose dirty dealings have been exposed. So far they are set to manage 648 units across Twin Parks West, Franklin Avenue and Highbridge, or 4% of the total units being converted.

Despite scoring high during inspections, an inquiry last spring by WYNC found that residents felt otherwise; that repairs needs were not being addressed. They also found another “large red flag: According to the city’s Department of Finance, Kraus owes the city $148 million in unpaid property taxes.” Turns out the patriarch who passed in 2002 had racked up back taxes by neglecting properties that didn’t turn a good profit.

From their reporting, it appears their selection as a private partner is not based on their stellar track record as property managers, but is part of a settlement between the City and the family to recoup revenue owed. Through this relationship, the city is essentially helping them get a low interest loan which will help them pay off their tax debt. To boot, Councilmember Reynoso suggested, “They’re also looking to give them a tax break on the property because they are providing affordable housing.”

Apex Building Group is a part of the same RAD conversion deal as The Kraus Organization, and also mentioned in the report by WNYC. They are set to manage 1,206 units across Twin Parks West, Franklin Avenue, Highbridge, Audubon, Bethune Garden, and Marshall Plaza, or 7% of the total units being converted.

As WNYC reports, APEX has a history of violations, yet this wasn’t considered because the background check failed to include it. “When WNYC pointed out the oversight, DOI blamed the problem on a database glitch and sent NYCHA the violation history — six months after the contract was signed.”

C+C Management and Kalel Holding are mysterious LLCs that are involved in three deals that will effect 3,925 units across Linden, Audubon, Bethune Gardens, Marshall Plaza, and more than ten in Northern Manhattan, or 24% of total units being converted.

While C+C Management has a website, it is janky, sparse, and underdeveloped, with no names or faces. Kalel Holdings doesn’t even have a website. Suspicious LLC activity is frequently connected to secretive financial practices like concealing and laundering money.

What is going on? This selection of private partners is so very blatantly bad. You can not look at this list and think the City and NYCHA and HUD are doing the best they can by tenants. These suspicions are further heightened by some of the other troubling and telling relationships my inquiry uncovered.

Jeffrey Levine, head of Douglaston Developers, Levine Builders and Clinton Management who have been appointed to Linden Houses, and Bernard Warren of Webb and Brooker, a firm that will be operating at Audubon, Bethune Garden and Marshall Plaza both have strong ties to the Real Estate Board of New York (REBNY). Levine is a member of the executive committee, while Warren serves on their Board of Governors, Residential Management Council, and is co-chair of their Diversity Working Group.

Four groups also have close times to Mayor De Blasio and former-Deputy Mayor Alicia Glen, two of the main architects of PACT, or the version of RAD that we have in our City. David Kramer of Hudson Companies, and also Broadway Builders and Lisa Management who will be working at Boulevard Houses are a known close ally of De Blasio, meanwhile The Arker Companies have been working closely with the Mayor to carry out his other displacement plan – Housing New York. Similarly Ron Moelis of L+M Development Partners is known to have close ties with Alicia Glen, meanwhile Rafael Cestero of the Community Preservation Trust penned an oped with Glen wherein they chide the activists and residents calling for a rent strike.

This inquiry is merely preliminary, at best – more can and should be done to investigate these entities further. But even if we stopped here, we have enough evidence to seriously question what the RAD program is all about and who will ultimately benefit. “There’s money to be made in affordable… Affordable housing is a great business from the standpoint that it’s a steady business.” He also admitted that the “government directly or indirectly subsidizes about 70 percent of the capital stack.”

As demonstrated, many of these private entities share a track record of evictions and tenant neglect and abuse. The reporting about The Kraus Organization also speaks to the profitability of such business practices. Ron Moelis’ comments at The Real Deal’s 12th annual New York Showcase in May of last year undergird this point further. There he stated, “There’s money to be made in affordable… Affordable housing is a great business from the standpoint that it’s a steady business.” He also admitted that the “government directly or indirectly subsidizes about 70 percent of the capital stack.”

So, are the privatization and financialization plans the City, NYCHA and HUD have cooked up  really about creating a better future for NYCHA tenants, or about yet another payout to private developers?

And, given the evidence of high rates of eviction, in turn RAD conversions seem to represent another bout of displacement and dispossession for Black and Brown communities more than anything else.

And where did those 80 households that were evicted from Ocean Bay Houses go? Are some of them finding temporary homes or relief in shelters and services operated by Acacia Network, further justifying that allocation of larger and larger sums of public money?

This inquiry further confirms that which many residents, activists and advocates have been saying all along, RAD – and other privatization and financialization schemes – is a bad deal for the residents who call NYCHA home. They must be arrested now. As I have argued elsewhere, we need public funding now, and we need to create pathways towards resident management.

These things can and must be done, even now – especially now – in a post-COVID-19 world.