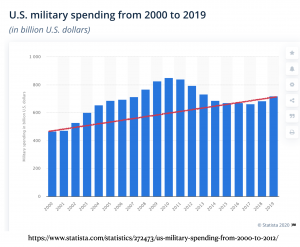 While Trump has been attempting to slash funds for public housing, his budget proposals and our approved budget show a consistent influx of funds to the Dept of Defense.

Today, under Trump, the United States is spending more on its military than at any point since World War II, with the brief exception of the invasion of Iraq in the early 2000s. In 2015, the military accounted for more than 50% of discretionary funding.

Under Trump, our military budget has steadily increased. However, this budget has long-been sizeable and increasing.

When compared with that which has been allocated for public housing, it appears to mock residents.

This bi-partisan budgetary decision is violent on two accounts. It highlights to role our government officials have played in disinvesting from public housing at the same time that repairs due to age and wear were intensifying. The state of these buildings have consequences for the lives of those who live here.

The Dept of Defense – formerly known as the “War Department” – is a violent US institution: According to a study by Brown University last year, more than 800,000 people have been killed as a direct result of the U.S.-led wars and bombing campaigns in Iraq, in Afghanistan, in Pakistan since 9/11 — more than a third of them civilians. Many more hundreds of thousands more have been indirectly killed as a result of wars involving the U.S. military — from disease, sewage issues, damage to infrastructure.

This analysis ultimately speaks to the shared but different harm imposed on disparate populations by this decision that has been made consistently over the last century – the decision to fund American Imperialism at great human cost.